Ballinger Fire Department
About Us

HISTORY OF THE BALLINGER F.D.

The Ballinger Fire Hose Company was organized on April 18,1905, in Ballinger, Texas in the county of Runnels. The first meeting was held at Ed Glober’s meat market. At this meeting the first officers were elected. Jon Hoffer was elected as President. I. O. Wooden as Vice President, T. B. Hoffer as Secretary, and Ed Glober was the first man to hold the Fire Chief position. There were twenty men present at the first meeting. The first matter of business was the purchase of equipment and appointment of two men to attend the State Association meeting in Austin on May 10, 1905. The Ballinger Fire Hose Company became a member of the State Association in 1906. the following men served as Officers in the State Association through the Years Chief Louis Cohen served as the Fourth Vice President in 1927 until 1928 when he passed away. Chief Chester Cherry worked his way through the chairs and served as President of the State Association in 1943. Stephen Brunson was appointed the chairman of the Constitution and By-Laws Committee in 1990. Alex Kvapil was selected as State Fire Fighter of the Year in 1997. Ken Kvapil was selected State Fire Fighter of the Year in 2002.

In January of 1908, a fire station to house the wagon and team was built by the City at the cost of $250.00. The first fire alarm was installed at the station at this time. The Fire Company operated from this station with horse drawn equipment until late 1916, at which time the City of Ballinger bought its first piece of motor driven equipment. This was a 1916 American- La France, type 10, five hundred gallon pumper purchased from the American-La France Apparatus Company of New York State. After making several record runs to outlying communities, the German Silver radiator fire tuck from Ballinger became guide a convention piece. The Department has restored the truck at this time to its original shape.

In the early 1920s the men of the Fire Department equipped a small Chevrolet truck with two forty gallon soda acid tanks to combat small fires. The American-La France and the Chevrolet served the City of Ballinger and outlying communities for several years

The year of 1930 saw the City build a new City Hall and Fire Station combination with the driver's living quarters above the station. This building is now being used as the Police Station and Fire Station. The City also bought a 1930 model, type 212, seven hundred fifty gallon American-La France pumper, bringing their total to three pieces of fire fighting equipment.

In 1947, the City retired the 1914 American-La France and bought a 1947 Ford fire truck built by the National Fire Apparatus Company. In 1956, the 1930 American-La France was sold and an International seven hundred fifty gallon pumper equipped by Howe Fire Apparatus Company of Anderson, Indiana, was bought, in 1958, the City bought 1958 International five hundred gallon pumper from the same company. In 1963, the City bought a six hundred fifty gallon booster truck. The three Internationals served the City of Ballinger along with a well- equipped rescue unit and a trailer-mounted light system. In 1974, the Ballinger Volunteer Firemen equipped a two thousand five hundred pound army surplus truck with a fourteen hundred gallon tank and pumps to combat rural grass fires. In 1979, the old rescue unit was replaced with anew GMC van. Then in 1980, the City purchased a new Ford fast attack pumper for the Department, bringing the total number of vehicles to six. In order to house all the vehicles, the City of Ballinger constructed a new Fire Station Annex directly behind the old station. The new building also contains a classroom where the firemen can regularly meet to conduct their business. In 1985, the City purchased a 1985 Chevrolet one thousand gallon pumper to replace the 1958 International pumper, which is now serving as a reserve pumper. In 1985, the firemen purchased a 1985 Chevrolet truck and installed a sixteen hundred gallon tank and pumps on it to replace the old grass fire fighting truck. The Department has purchased the "Jaws of Life", Rescue tool, a Stark Manufactured machine to refill the breathing apparatuses, and also a smoke machine to use in fire practice drills and fire drills at the local schools. In 1994 the department purchased 11 new MSA air packs, fire hose and some new bunker cloths, thru a $25,000.00 low cost loan. In 1995 the city purchased a new 1,250-gallon Chevrolet pumper to replace the last old International pumper in the department.

In 1997 the department purchased a used Ford three quarter ton truck and installed a new Skid unit on it for use as a grass fighting and quick attract unit.In 2001 the department purchased a Sparky the fire Prevention Dog Costume for the use in fire prevention programs. The year 2002 saw the department purchased a Thermal Imaging Camera, to be used in fire fighting and rescue operations. In 2003 the Fire Department applied for a FEMA Fire Act Grant and was lucky enough to be awarded a little over $47,000 for outfitting 34 members of the department with new complete set of turnout gear for structural firefighting. In 2006 the dept has upgraded apparatases, One brush/grass firefighting truck was replace with a 2006 F450 Ford chassis with 500gl. tank and Hale 250 gpm pump, the bed was built by a dept member and other helpers. The truck was bought by the result of Texas Forestry Grant. The City of Ballinger purchased a 2006 E-One 1250 gpm engine in October of 2006.

The Ballinger Department has fought its share of house fires, car fires, grease fires, grass fires, and several other types of fires. The most spectacular fire many people talk about was an Oil Mill fire. The flame from the burning cottonseed could be seen for miles. The most insurance paid for fire damage was $3,000,000.00 for the fire that destroyed the Ballinger Junior High School December 3, 1990. Other large fires in Ballinger included Higginbotham Bros. Store, the Texas Theater and City Cafe fire, the Goodyear Store in downtown Ballinger, Complete Packaging Building and General Dollar Store. The fire that caused the most trouble was a grass fire in 1974, when seventeen sections of land burned due to high winds. Eight area fire departments helped combat this fire. The Ballinger Department has helped in the recovery of several drowned victims. In 1974, the department rescued three men from a City water tower when they were overcome by paint fumes inside the city water tower tank.

Burn Ban is currently in effect. 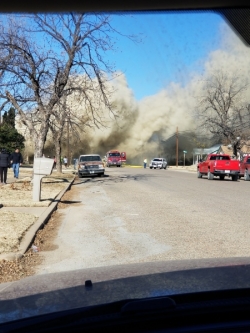 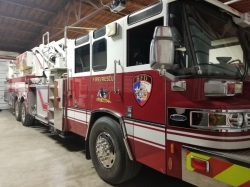 What is your opinion of the Ballinger Fire Department.

No birthdays this month

Tweet
Copyright © 2006-2021. YourFirstDue Inc. All Rights Reserved. Designated trademarks and brands are the property of their respective owners. Content on this web site is supplied by Ballinger Fire Department. YourFirstDue Inc. cannot be held responsible or liable for any content, text, pictures, or any other media found on this web site. Maintained by the members and staff of Ballinger Fire Department.
Management Login
Powered by